Our results will provide a greater understanding of how different landscape features such as seismic lines and wellsites influence both predators and caribou. In addition, we will produce spatial data products that can be used to identify caribou calving habitat with the highest likelihood of calf survival.

Ultimately this project will help minimize industrial impacts to caribou populations in an efficient and cost-effective manner by prioritizing restoration areas and identifying areas of high conservation value.

Woodland caribou populations are declining throughout western Canada. Anthropogenic landscape changes are thought to contribute to caribou declines via habitat loss and degradation, and by creating favourable habitat for sympatric ungulates and predators that increase predation pressure on caribou. Mortality of caribou neonates is particularly important because population growth is inherently limited by the ability of caribou to produce only a single calf per reproductive cycle, and some studies report that up to 50% of calves die in the 6 week period post-calving. Management actions aimed at improving calf survival therefore offer a significant opportunity to contribute to caribou recovery efforts.

Predation is the main cause of mortality for newborn caribou during the calving season. Caribou calves are vulnerable to a wide guild of predators including wolves, grizzly bears, black bears, cougars, and lynx. Historically, caribou have adapted to this predation pressure and decreased the chance of encountering predators by using low productivity and high visibility habitat during the calving season, including black spruce bogs in the boreal forest and alpine areas in mountainous regions.

However, recent anthropogenic landscape changes could limit the ability of caribou to avoid predators during the calving season by decreasing the amount of suitable calving habitat and thus forcing caribou to calve in suboptimal habitat with higher predation risk, and improving habitat suitability for predators via apparent competition (i.e., increased numbers of alternate prey driving an increase in predator numbers), thus increasing overall predation risk on the landscape. To date, there has been little research on how multiple industrial features (e.g. cutblocks, roads, seismic lines, pipelines, wellsites) interact with multiple predators on the landscape (i.e., wolves, bears, etc.) impact caribou calf survival.

By evaluating calf survival as a function of exposure to both anthropogenic features and predation risk from multiple predators, land management actions can aim to mitigate the most important sources of calf mortality. Ultimately, the project results can be used to prioritize areas for restoration that negatively affect calf survival or that increase predation risk, and to improve caribou population growth in a cost-effective manner.

We will use a statistical method developed specifically for caribou that utilizes sudden changes in movement rates among GPS-collared female caribou to identify calving events and subsequent calf survival (Nobert et al. 2016, Demars et al. 2013). To identify calving sites, we will apply this movement-based method to long-term (1998 – 2017) GPS collar datasets, provided by fRI Research and the Government of Alberta, within the Narraway (n = 85), Redrock-Prairie Creek (n = 124), A la Peche (n = 26) and Little Smoky (n = 43) herds. We will construct resource selection function models of caribou calving habitat by comparing the landscape attributes (e.g., elevation, slope, canopy cover, industrial features etc.) at calving sites to the surrounding available landscape. We will apply the calving habitat model within a GIS to map the spatial distribution of the relative probability of a female caribou giving birth to a calf within the four herd ranges. The products of this analysis will help to identify caribou calving habitat and the types of anthropogenic features caribou avoid during the calving season. In addition, the movement-based method will also determine calf survival within the first four weeks after a calf is born, and this information will be used in stage 3 to evaluate the impacts of anthropogenic features and predation risk on calf survival.

We will use GPS collar data from 46 wolves (GOA, University of Alberta) and 300 grizzly bears (fRI Research Grizzly Bear Program) to build a series of spatially explicit RSF models that are proportional to the risk of a caribou encountering a predator. For species where GPS collar data is unavailable (i.e., black bear, cougar, and lynx), we will use RSF models developed by other researchers in neighbouring regions and occupancy data from 50 camera traps deployed annually (2013-2017) by fRI Research along with 120 camera traps deployed by InnoTech Alberta (2006-2010) within the study area. Knopff et al. (2014) developed cougar RSFs in the neighbouring Rocky Mountain House Region, and Keim et al. (2011) created Lynx RSFs in the Athabasca Region. We will use GIS to translate these statistical RSF models into spatial data layers depicting the amount and distribution of predator habitat within caribou calving areas. The spatial risk layers will be provided as a project deliverable, and will also be a key component of subsequent survival analysis of this project.

Currently, predation risk layers in the study area are available only for wolves (DeCesare et al. 2013), however caribou mortality investigations conducted by the fRI Research Caribou Program indicate that cougars and grizzly bears are equally important predators of adult caribou. In other caribou ranges where calf mortality has been studied through direct observation, black bears and meso-carnivores (e.g., lynx) are also important predators of calves. Direct observations of calf predation events are difficult due to logistical and ethical constraints. However, by building predation risk models, we will be able to rank the relative risk of mortality from each predator species of interest and identify ‘hotspots’ where predation risk is particularly high. These maps will delineate areas where the relative risk of predation from one or multiple predator species is high for caribou, and therefore could be an area of focused restoration to reduce predation risk for caribou.

In the final stage of the proposed project, we will develop a survival model to test the relative influence of exposure to anthropogenic disturbance and predation risk on calf survival. Calf survival within the first four weeks after birth will be determined using the movement-based method detailed in Step 1 of the project (Nobert et al. 2016, Demars et al. 2013). We will assess the impacts of industrial development and predation risk on calf survival throughout the gestation period as well as during the first four weeks of a calf’s life, to account for a potential time lag between stressors on pregnant female caribou and calf survival. The calf survival models will allow managers to rank the relative impacts of different anthropogenic features and multiple predators on calf survival, and in turn develop management actions to mitigate potential negative impacts of the industrial landscape on caribou populations. This stage of the analysis will provide a strong link between calving habitat, calf survival, and exposure to anthropogenic disturbance and predation risk. The results of this analysis will be prepared for peer-review publication in the context of landscape management to promote caribou recovery. 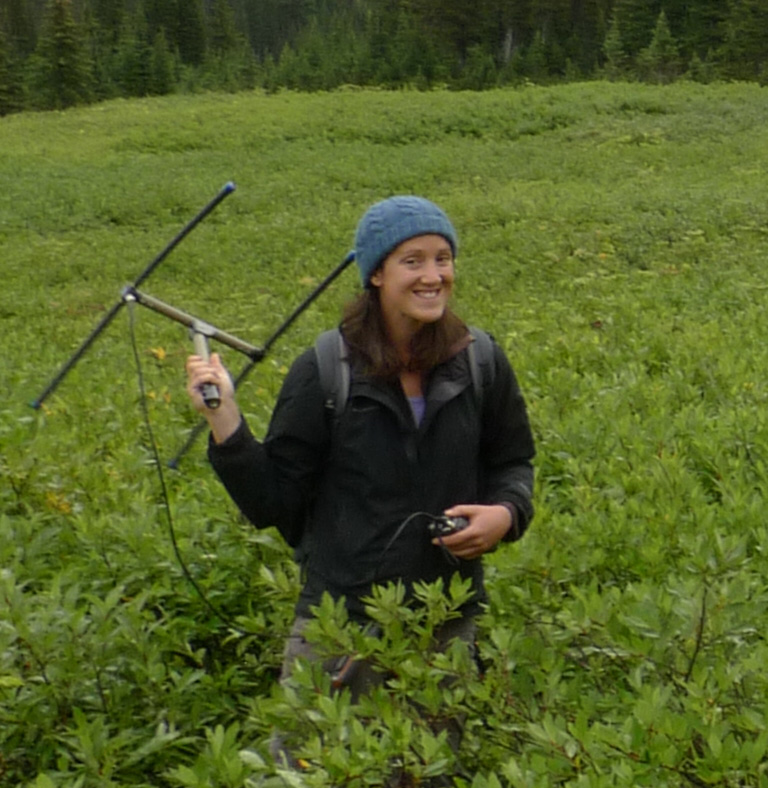